Recipe 3:  when my mum did this dessert for the first time i was amused by the fact that was so good but not massively heavy. Being based on apple this is the perfect dessert after a quite heavy dinner with lots of courses.

Ingredients for 6 people: 1 kg. of  Golden apples, limon zest, 4ooml whip cream, 100 gr. of sugar. For the Zabaione: 3 eggs, 6 spoons of sugar and 100gr of whip cream, some spoons of Marsala or porto wine and cinnamon.

Start the preparation cutting all the apples in little pieces, taking of the skin e put them to cook with 2 spoons of  water, some lemon zest and the sugar. Leave it there until soft and keep on mixing until dry but take care to don’t let them stick to the pan. Add some more water if needed.

Let them cool down and pass all in a mixer. Then whip the cream and add it to the apple mix to create the mousse. When ready, just place it in the fridge.
Now you need to prepare the Zabaione :  Mix 3 egg yolks with sugar until creating a creme, add some marsala or porto wine and cook putting the recipient in another saucepan full of hot water and on the fire. We call this way to cook “bagno maria” so the fire is not in direct contact with the ingredients but they get cooked by the hot water.

Mix until getting thick and when ready leave it in a side to cool down. Then add the whipped cream and put in the fridge on top of the apple mousse.
Serve with some cinnamon on top and enjoy!

While the apples mix can be prepared the day before and put it in the fridge, the zabaione need to be prepared the same day that you are going to serve it and placed on top of the mousse and in the fridge. In this way, this recipe it’s perfect when you have guests and you don’t want to spend too much time in the kitchen or fight with the oven!

Recipe 12: This is a classic in winter and it was the only fruit I would eat with pleasure when I was little. Considering that in Christmas we have already lots of sweets I decided to close the dinner with a light fruity dessert: cinnamon hot apples.

Ingredients for 6 people : one quite big apple for each person (I prefer to use Golden apples), a glass of sweet white wine, 1 spoon of cinnamon, 6 spoons of sugar and some flakes of butter. Then, to serve it in the best way, I suggest you to have in one side some whipping cream for the final composition.

The preparation it’s very easy. Wash the apples, and cut out the middle section with a little knife. Prepare a baking pan with some baking paper or butter and flour on the bottom to don’t make the apples stick to it. Place the apples in the pan and pour the white wine on them.

In a cup mix the sugar with the cinnamon and put it on the apples. Then place some flakes of butter on them and place them in the oven at 200 degree for 30 minutes. From time to time pour some of the apple sauce on them to make them cook better. 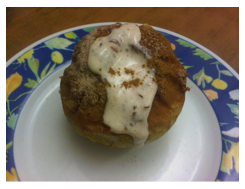 When ready, serve the hot apples with some whipped cream on top or on a side and some other sprinkle of cinnamon.

Recipe 24: This is the second cake i cooked last weekend and for how much I’m sure was good the original recipe, i have made some little change, considering also that some of the ingredients are not available in this country.

Here the original ingredients and the ones i used to make a little Cenci cake: a part from the Pasta frolla that you can make following this recipe, buy 2-3 pears or apple, you will need some marsala, but i have add a bit of other liquor i had at home, some apricot jam, 150gr amaretti then i added also the white of one egg and chocolate in powder.

Wash, peel and cut the pears or the apples in pieces. Let them cook a bit on the fire with some water, while in the meantime you will stretch the pasta frolla, and you will create the base of your cake. Place it in a baking pan on some baking paper, make the base really thin and then create some holes with a fork to avoid the pasta to grow up and create bubbles.

Take off the pear from the fire and drain them from their liquid. Mix to this a bit of liquor and in the meantime place one layer of apricot jam directly on the base of the cake and then add on top the pears.

Whip up one white egg with a mixer and add then to this the pear juice with the liquor and some spoon of apricot jam. In reality the recipe was just requiring at this point to mix the apricot jam with some marsala egg flavored, but i thought that this mix could be equally standing for that.

Place the mix on top of the pears and cover with 150gr of smashed amaretti. Finish the cake with a good quantity of chocolate in powder, but you can just put it in the oven like this and once ready cover it with melted dark chocolate. In UK infact the powder chocolate is not so sweet and i think could be better just the melted chocolate to make it more sweet and delicious.

Serve it hot and enjoy!

Recipe 85: Always because i’m still trying to eat light an loose the weight tooken in Easter, this week i give you another recipe to eat meat and vegetable with a little twist. This time is even easier than the previous recipe and it’s all about a sauce to serve with turkey or pork: Apple Sauce.

Probably most of you already tried this sweet and sour combination before, but here is my mum’s recipe and i can tell you it’s all a new discovering.

Ingredients for 3 people:  3 apples (i used the golden delicious), 2-3 spoons of sugar, a lemon and some nutmeg.

Wash the three apples, take off the skin, the seed and the center. Cut them in little piece and put them in a saucepan.

Add the sugar, a bit of nutmeg, and the grated zest of half a lemon. Be careful to take just the yellow of the lemon because the white it can be sour.

Mix it all and pour some water, but just enough to cover all the apples. If then this is not enough to cook them well, you can always add more water later. Leave it cook for half an hour on a low fire.

When the apples will be cooked you will be able to mash them and the mix it will reach the consistency of jam. Take everything off the fire and add the juice of half a lemon.

Mix again all and serve it with the meat. The contrast of a very sweet sauce with the salty meat will be perfect.